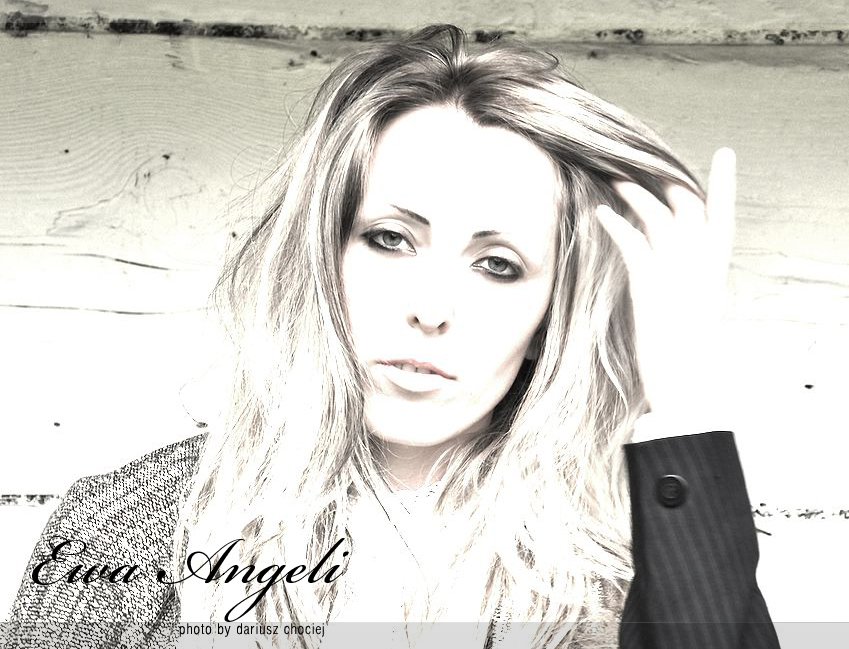 Welcome to the Ewa Angeli's Web Site, a resource for those seeking information about this talented singer and songwriter.

EWA ANGELI is an accomplished multidimensional pop artist with a splendid, memorable, and increasingly acclaimed voice. While she hails from Poland, Ewa writes and performs in English, and her writing includes formidable collaborators, as do her recordings.

Her increasing emphasis is dance / pop, and she has received critical recognition for her work in smooth jazz pop. One critic notes that Ewa’s vocals allow her to draw and hold a crowd regardless of what she sings, in any genre. A performing songwriter, lead vocalist, and percussion player, Ewa has three albums in current release.

Ewa’s musical, vocal, and songwriting talents have attracted first-rate musicians and producers on two continents for both her first and second studio albums and now for new Christmas release.

Ewa is NOT another insubstantial pop tart! Sure, she is beautiful and charming, with a compelling and engaging presence – and she is educated, with a degrees in Psychology and International Relations. Ewa now resides in Los Angeles, fulfilling an important part of her dream and path as a professional musician. Through work with accomplished and highly-regarded artists and producers on her three CDs, and a fourth CD in early development, the beautiful Ewa epitomizes the freshness of the young, trained European artist who has studied and mastered the American pop music idiom. Growing-up in Poland, EWA hungrily sought and listened to American jazz and pop. She was inspired by many artists, all of them American, including Eva Cassidy, Sade, Bonnie Raitt, and many others.

Her listening skills are not limited to music. Ewa’s attentiveness and quick, yet thoughtful, answers make her a fine interview subject. She is relaxed, confident and charismatic onstage and off. Her conversational accent is charming.

As a lead singer with unique and effective elements of style and voice, Ewa mesmerizes audiences and fills dance floors. Committed and hard-working, steadily building a following and fan base, Ewa attracts music industry and fan attention throughout Europe and the U.S.A.

As performing vocalist in Poland, Ewa even traded-in her golden prospects as a successful fashion model so she could join a pop/rock band. After moving to Los Angeles in 2005, she formed a group that was eventually called EWA.

The group's debut album, "Hold on to Me," (2006) brought her recognition on the L.A. music scene where it was noted that, “Her noble elegance and natural beauty contribute to her mysterious image.” More recently, Ewa chose a solo career using her full name, Ewa Angeli.

Ewa Angeli's second album, "Butterfly Wings," is a top-quality mix of dance pop musical colors infused with neo-jazz and electro-pop, with some skillful ’80s-flavored bass and grooves. It’s been called “atmospheric” and “a groovypnotic trip.” It is radio-ready pop, loaded with hot choices that’ll be hits, and splendid vocals. Ewa Angeli brilliantly balances dance grooves, rocking pop melodies and harmonies and thoughtful lyrics, with everything from the edgiest guitars, soulful piano, deeply haunting rock and acoustic instrumentation, and a dynamite and enviable vocal range.

Ewa Angeli’s new album “In Night’s Still Silence” introduces to the world the traditional Polish Christmas Carols recorded in English for the first time in history. Reaching back as far as to XVIII century these beautiful Christmas Carols in traditional and contemporary arrangements bring to the world the magnificence of Christian tradition of Christmas. They will brighten up the Holiday Season for all – the young and the old. The beauty of the melodies and lyrics equal to such classics as “Silent Night” and “Joy to the World,” will touch and move us in our memories to those happy moments spent with our loved ones, our families, and back in time to our childhood.

Collaborators with Ewa:
Fred Bensi, from France, produced Ewa’s new album “Butterfly Wings.” Fred has written with and for Ewa; he is the arranger and an instrumentalist on the album.
Bernie Torelli, two time Grammy® nominated engineer, Bernie mixed and mastered Ewa’s new album.
Rick Thibodeaux (Bo Donaldson & the Heywoods, many other projects) is Ewa’s chief songwriting collaborator. A California Country Music Association (CCMA) "Bass Player of the Year," Rick's songwriting is heard on dozens of network and cable TV shows, including: "The Sopranos," "Ed," "Melrose Place," "All My Children," "The Young And The Restless," "One Life To Live," and in feature films and movies of the week.
Alan Deremo (John Denver’s bassist) arranged Ewa’s first album, “Hold on to Me.” He’s worked with dozens of stars, from Bo Diddley to Kathy Mattea, and is a composer for Fox Sports Network, ESPN, Kraft Foods, Six Flags, various IMAX films, and more.
Tom Herzer produced Ewa's Christmas album "In Night's Still Silence." He worked with many artists including Donna Summer and Kenny Rogers among others as musician, engineer, and producer.
Warren Harman arranged and recorded orchestration on Ewa's Christmas album. Located in Nashville Warren currently works as musical director to Kenny Rogers and also co-produced several of Kenny's  albums.